Last weekend I have run my second marathon. My first one was Barcelona in 2011 which didn’t went as expected because of some strong knee pain. Anyway meanwhile I have been logging the due km preparing the second marathon since December.

I usually run 3 times a week even if I’m not preparing any race, but by the end of the year I already knew I would sign up for another marathon. I needed a decent finish to prove it to myself that Barcelona was just a bit of bad luck and probably a somewhat faulty preparation (putting too many km in few months).

So by the beginning of the year I signed up and booked flights and hotel for the 2012 Copenhagen Marathon taking place on the 20th May. It was a city I did not knew so I could discover it and also run the marathon which is always great. 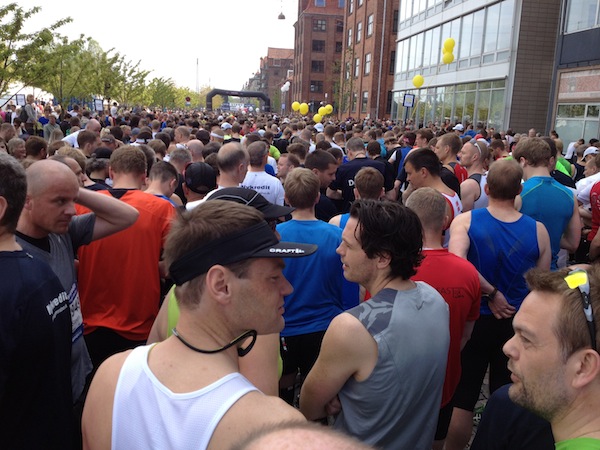 My view from the starting line

I have already written a quick and onsite post about the city itself so this time I will focus on my thoughts about the race. So starting with the usual race expo it was well organized and allowed for a quick bib pick up. They had also announced a pasta party but it was a very small thing with someone outside selling some not so good looking pasta (on the contrary in Barcelona it was a really free and delicious lunch).

I must confess I struggled around the city to find a nice and simple plain vanilla pasta joint, but I didn’t found it. You will find lots of Italian restaurants but the dishes are always more elaborate than plain pasta with tomato sauce or something similar.

Anyway, after spending 4 days in the city chilling under lots of clothes (max temperature around 12C!) there comes race day blowing away the forecast with 26C! It was the hottest day in Copenhagen this year, so far as they told me! I guess the temperature has taken its toll. I was always looking out for hydration stations on the course which is something I rarely do. I also think the Danes took a hit there because I guess they are not used to such an hot weather.

Reaching out for the race start I found a real party with 12k runners and their families around the course start. I placed myself behind the 3h30 pace setters (which are called fartholders in Danish) and waited for the race to start! I was trying to run normally but it was impossible behind the pace setters. Too many runners were trying to keep up with them just a couple of meters behind and since I felt I was below my pace I moved on around km 7/8. That proved to be the right thing to do since I could improve from 4m55s to around 4m45s and I was at ease doing so.

Something that really surprised me was how many people were loudly cheering for the runners. I believe there were not 500m where the cheerful crowd was not heard which to tell the truth is something everyone running in Portugal knows that doesn’t happen. Maybe it is always like that or maybe it was because of the high temperatures but it was nice to feel the warm (literally) crowd!

The marathon course is interesting even if it crosses the same course again 2 or even 3 times because the city center is fairly small. Anyway the course will go through most of the city tourist highlights, but I must confess that with all the crowd and the heat I couldn’t manage to sightseeing. Sometimes I wouldn’t even know where we were, since I don’t know the city that well.

I managed to finish with 3h27m10s which was what I was aiming for (anywhere around 3h30m). What does a runner think right now? I’ve made it? Yes I was happy about it but also concerned with the next one. The stakes are high for an amateur like me!

On another very positive note, I have to thank the Danish people for being so well intentioned and honest. After finishing the race I was tired and forgot my iPhone on the grass and went away. When I got there 5m later imagining I would mever see it again it had been delivered by a fellow runner to the organization and I got it back! How cool is that?

If you would like to check the race photos you can find them here. 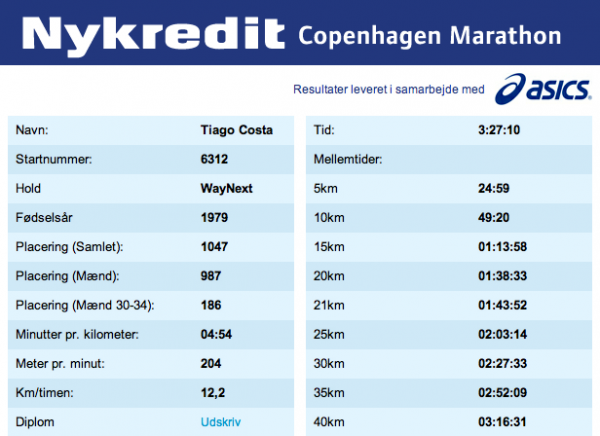