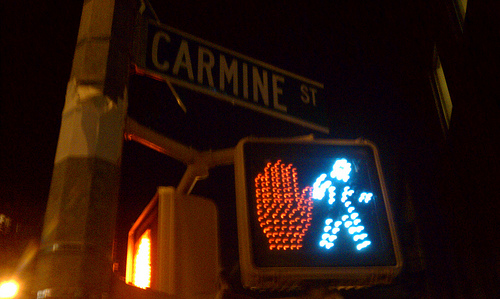 I must say I am surely not the most well behaved driver on the road, at least when I am in a hurry. Having a busy schedule and trying to squeeze as much as I possibly can out of each day makes me fill my agenda and many times I am on the rush going to meetings. Anyway, there are some lines I don’t cross (this is a good metaphor…) no matter how late I might be running and I do respect traffic lights and crosswalks.

Portuguese drivers are not known for being good drivers, at least when compared to most of the European drivers. If you go to Austria, for instance, no one will “floor it” to pass through an orange-redish traffic light, few people hit the horn and drivers do use their turning lights 90% of the times.

The idea of disrespecting crosswalks is something I really don’t understand and a point should be made about that. The more I am a pedestrian, and I do long walks on our neighborhood crossing the street a few times, I find myself trying to cross with drivers still flying through the cross walk about 50% of the times. I don’t believe those people have ever wondered what might happen to them if they run over someone at a crosswalk.

But when I am driving I also don’t understand why people don’t use turning lights. It is not that hard if you make it an habit, just like most people now just strap on their seat belts immediately after sitting inside a car. Everyday we see people changing lanes, sometimes at high speeds without notice and the turning lights could avoid some accidents I am sure, but it is something I don’t see most of the people using.

And, to finish this rant, I would just like to make another point about speed. Whenever there are those debates on TV or elsewhere about driving, I rarely see anyone admitting to speeding. Yet if I travel on the A1, Lisbon/Porto (something I do very often) for 300km and if I set up the cruise control for 120km/h, I am the slowest vehicle on the road, besides trucks and buses; so, just get real and tell the truth.

BTW just a final note about speed and have heard all kinds of arguments pro and against raising the speed limit on highways. I understand mainly the fear that an average driving speed increase that might lead to more and deadlier accidents; also some countries seem on the reverse route adopting lower speed limits to reduce fuel consumption and the carbon footprint. But, like I stated on the example before, I know it is hard to drive long distances under 120km/h, so I would be in favor or raising the speed limit to 150km/h except under rainy conditions, considering cars are generally safer nowadays (better handling with ESP, improved tyre grip and ABS brakes as a default for almost every car in the market) – my own personal perspective about that, when thinking about highway speed, is that the speed limit should be adjusted using categories, even if cars are generally safer, there are still differences and those could be factored in.