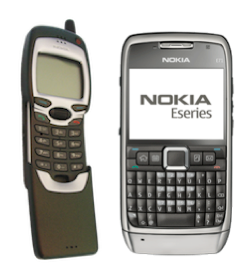 I have been a Nokia guy since mobile phones were a mature product (I still have the 7110 matrix style phone!). As far as I can remember I have owned about 4 or 5 Nokia models and I enjoyed using them until the last one I bought which was the E71.

I recall I went out to buy the E71 after the aquapack I was using while kitesurfing failed and the phone drowned. At the time I still thought the iPhone was too expensive and besides I felt like I needed the full qwerty keyboard to really be productive on the road (mainly doing emails away from my laptop). I even considered Blackberry but that thing about being tied to their servers (for increased privacy, so they say) when accessing data didn’t made much sense so I went with the E71.

Since the first power up of the phone I disliked the ugly graphics. Could Nokia really have paid someone to redesign the application icons again in 2010 instead of using the ones from 2007 E51? They could, but they didn’t do it so the phone’s desktop really looked crappy for a 2010 model. Also email support was far from being flexible but I was mostly using mobile web Gmail so it was working for me. The web browser was also very limited and inefficient (ahah) so using Twitter or Facebook was a really bad user experience!

So I just got in the mindset of buying the new iPhone and when the iPhone 4S hit the stores (I was hoping for the iPhone 5) I bought it together with a decent data plan. After about 1 month of usage I am almost as productive as I was with the E71 physical keyboard when writing stuff and I can now take the most of my downtime (you know, waiting for a meeting, being in line at the supermarket and other daily stuff).

One of the things I am most interested is email and I am still trying to make my mind between the native Mail.app or Gmail App. As for the rest my beloved Flipboard is something I also use regularly but I think it is no where near the same killer App it is on the iPad. I’m also enjoying Intragr.am filters for the quick and dirty photo shooting. Of course I am also using Runkeeper to track my runs and it does a much better job than Nokia’s Sports Tracker I can say! It is also a good thing I can load the iPhone with Youtube videos and listen to them while running. About Siri I still couldn’t find much effective use for it but I didn’t had the time to test it in full – it would be interesting to be able to dictate text and email messages but so far I could only ask some dumb questions about the weather and use it to set the alarm clock. I also must say the phone’s battery is far from perfect because it’s hard to make it last for even 2 full days, if I use it heavily it will last no longer than 24 hours, but it seems that other top smartphones like the Samsung Galaxy II have this same issue, unless you turn off 3G which is beyond the point for any of this devices.