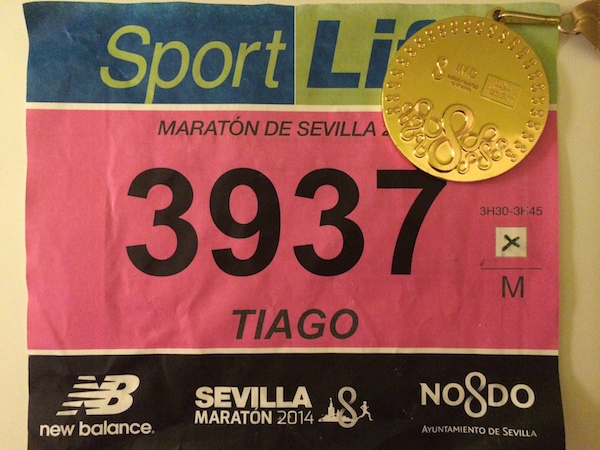 Last Sunday me and a bunch of Portuguese runners have raced Sevilla’s Marathon. I now understand why people talk about it so much, because the course is really great and flat, the weather was fantastic (for February), even if a bit chilly when we started (7/8C) and having the finish line inside the olympic stadium is a really nice experience. The race finished  with almost a full lap on the track inside the stadium with people roaring all around and that is a really a nice feeling.

Having been a bit sick twice in the same week, first with a little fever and then with a cold I didn’t had high hopes for the race, wondering if my lungs would hold it or make me retire. Anyway I have managed to keep going at an average speed of 5m/km during all the race and have passed the half marathon mark at 1h45m exactly. The last half was a bit slower because legs started feeling tired, I did need a WC pitstop and also because I had to walk through 2 aid stations because they were handing out water on cups instead of bottles and that was the only way I could drink (and boy, I was thirsty).

Finish line for Sevilla Marathon inside the Olympic Stadium

All things combined I finished with 3h33m14s, which is about 13m more than my marathon PB, but I still consider it a good result, since I have not been focusing only on running on the past few months. I felt stronger and with less back issues throughout the course meaning the core exercises are working.

To finish this post I must write about what happened after the race, because the race was really really awesome, surely one of the best I have ran but the parking logistics put the organization to shame. When we got back to the car, that was parked inside the olympic stadium parking (where the volunteers pointed us to), we got stuck for about 2 hours until we could leave. I am not sure whether the organization had that planned or if something went south, but it was a shame and a real show stopper when everything had been so smooth. It might not seem like such a great deal, but I had relatives waiting for me in the city center for lunch, the apartment keys had to be returned, I was left with nowhere to bath (saved by a friend…) and lost most of the afternoon just trying to fix things because of this time waste. Everything was so great, with the stadium being both the sweet and sour of the day…