To start I would like to say that I read a lot less than what I would like. I can blame it on 1.000 things, but I won’t because I believe that we must find the time to do the things we really want to.

With that said, I would like to share some thoughts on the best two books I have read in the last 12 months and probably the best in the last couple of years (mainly because I have been reading a lot about investing and that is a completely different story – more on that someday).

Those books are without any doubt Rework written by Jason Fried and David Hansson from 37Signals and Ultramarathon Man by Dean Karnazes. They are about completely different topics (as you might guess); while Rework is all about changing the way you do things while managing your business (or at work), Ultramarathon Man is about endurance running. 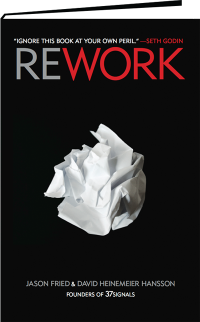 I really enjoyed Rework because I review myself a lot in many ideas there and I believe our company success is at least in part due to following some of its principles. Of course we don’t fully embrace all these principles but I know most of them can work, because I have tried them before. In the end I was happy and grateful to find that someone had similar ideas and took the chance to write all of that down. And they have really done that really well because the book is so engaging that it is hard to put it down once you start (I read most of it in 3 hours, the first time I picked it up – thank you Vasco for finding it). All of the book chapters are very short and focused, so every couple of pages they make a case for something. If you haven’t read it yet just read this excerpt and make sure you read it all, it is worth your time and money, even if you don’t run a business but have a work life. 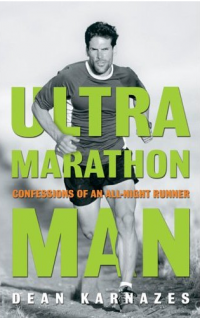 Now the other book tells us the real story of Dean Karnazes, Mr. Ultramarathon Man. More than describing the technical aspects of running (most of those are never mentioned aside from the most trivial), Dean tells us about the amazing feats he has accomplished and how hard it was. The great thing here is that he makes it as real as it gets (you will know that if you have been into long distance running), telling you not only about the glory and satisfaction but also about how he overcomes all obstacles in his way, to hit the road for (!!) 320km straight. I found this book truly inspirational and since I was already very much into running it made me want to accomplish more and that is why I have been training to run Barcelona’s marathon by the beggining of March.

Two very different books but they share the wisdom of pushing you to go beyond your comfort zone and making you a better person at work (more productive and focusing on what really matters) and in sports (challenging you to never give up without a fight).

Some interesting quotes from his book:

– “Struggling and suffering are the essence of a life worth living. If you’re not pushing yourself beyond the comfort zone, if you’re not demanding more from yourself – expanding and learning as you go – you’re choosing a numb existence. You’re denying yourself an extraordinary trip.”

– “You can’t be afraid to fail, but unless you fail, you haven’t pushed hard enough.” – I think this one is so true for running (or any other sports for that matter) as it is for business and life in general!

I will just finish this post with a short story Dean Karnazes tells us in his book:

“In junior high, Karnazes met Bernard Emil Weik II, a track coach who became Karnazes’ mentor and introduced him to the appeal of long-distance running. Weik’s basic running instructions were simple: “Go out hard and finish harder.” Using this motto as a basis, that season Karnazes won the one-mile California State Long-Distance Championship held on the Mt SAC track. At the end of the race, coach Weik commented: “Good work son, how’d it feel?” To this Karnazes replied: “Well, going out hard was the right thing to do. It felt pretty good.” The coach replied: “If it felt good, you didn’t push hard enough. It’s supposed to hurt like hell.” – Source: Wikipedia

Just writing about this make me want to go out and run.