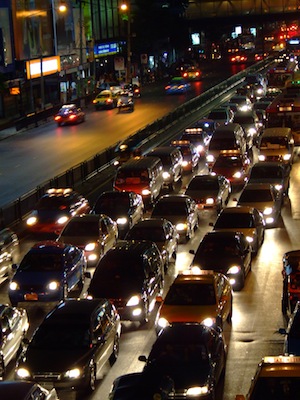 One of the worst things of living in a fairly big city (at least, big, for the Portuguese standard) is traffic.

I have this thing with traffic because I feel like it is such a waste of time and one that you can hardly control, not only because in some roads (like Segunda Circular) it always feels like playing the lottery but also because if you have to schedule appointments with other people you can’t always avoid the peak hours, which is something I try to do.

With that said I have not yet seen any reports on this matter for our country but in the context of all the efforts needed to improve workers productivity I would believe that more could be done to reduce traffic jams and thus improving productivity.

If you give it a thought, with some quick math, we can conclude that a minor traffic accident, causing a jam afterwards, that would delay, say, 8.000 people for 30 minutes, could cost something like 200k€ (considering an average of 50€/hour for the value added to the GDP). We know that a lot of car accidents happen everyday on rush hours in the most busy cities in Portugal so I would say that it is a safe bet to believe that more than 1M€ is lost every business day on traffic jams, considering people do not fully compensate for the time they wasted waiting inside their cars.

I think that two simple measures could reduce the thousands of hours lost to traffic everyday:

I deeply believe the cost of this two solutions are way smaller than the loss on the GDP.

Of course that reducing the distance between your house and the office could also be an option but that wouldn’t stop car accidents from taking too much time to be sorted so when you need to deviate from that “standard” home/office/home route the same would apply.