This was my first marathon but I have been running some 10k and half marathons in Portugal for the last 3 years and I really think Barcelona’s Marathon was a close to perfect event.

I was supposed to be in Barcelona Friday early afternoon but some work related matter got in the way and I had to postpone until the night. Meaning I got to the hotel already after midnight but I still had Saturday to stroll around the city (which is a favorite of mine in Europe).

On Saturday afternoon I went to pick the bib at the “Fira Barcelona” and everything went well. I even went to the “pasta party” which was already going on and had a nice “carbo-load” kind of meal. In fact I remember spending a lot of that Saturday eating here and there to load up my energy for the next day, but since we also walked some 10km strolling around the city it was not so much I guess.

On Sunday, the day of the race, the weather was perfect with 8-12C and the sun was shining. After loading up on an extensive breakfast 90 minutes prior do departure I got my clothes on. Even though it was not too hot, a t-shirt proved to be the right approach because after some km on the tarmac with the sun shinning it was enough (needless to say that I wasn’t wearing the Barcelona’s Marathon t-shirt because I believe you first have to earn it, so I never use them before reaching the finish line for the run 😉

We stayed in a hotel very close to the race start, which proved to be a very good option since the start was at 8:30am. Reaching the start line was easy and getting there I joined the 4-hour pacemakers. They were holding giant red balloons so they were quite easy to spot and to keep track of.

After the race started I quickly found it that it was useless to try to follow the pacemakers at a short range, because lots of people were trying to do the same, so I changed my strategy and gave them a 100 meters distance, so I could run without everybody getting in the way.

The course if pretty flat, which is a good thing obviously, and the sights are very pleasant. There are always lots of people cheering you up as you go. Enough water stations and some fruits also available after km 25.

I started on a slow pace aiming for 5m40s/km which is all you need for a 4 hour marathon. This is a pace about 40s/km slower than my average training pace, which is a comfortable speed to preserve my energy and muscles needed to go for 42km.  Everything went fairly well up to km 21/22 but then my knee (which had already sent some pain signals on the 4/5 weeks before the marathon on the longer training runs) just started hurting a lot and I had to alternate between running and walking fast which lead me to loose sight of the pacemakers and that was when I started wondering if I should just give up… but… being there and with all the commitment I had put into training I tried to keep going and at km 25 I decided I was going to finish the damn thing, even if I had to walk to the end (fortunately that wasn’t need since I could still run most of the distance or it would have taken me 6 hours or so…). In fact the first 21km took me ~2h and the last 21km took me ~2h30m because of all the pain.

I went through “the wall” at km 32, when all you think is that you are already on the tarmac for more then 3 hours and that you still have another hour to go, but then passing km 36 everything changes and although running 1 km starts looking like 5 km, my mind was very focused on the finish line.

So I reached the finish line which was my main goal. Nevertheless I’m not yet satisfied because I believe I could have made it in 4 hours flat if only my knee wasn’t hurting like hell.

This is the route: Starting at Plaza de Espanya, heading NW to go around Camp Nou then back again to Plaza de Espanya going through Tarragona, then on to Plaza Catalunya, up on Passeo de Grácia (km ~14), then to Sagrada Familia, then through Avenida Meridiana heading NE (km ~20), then back for a bit and down Pont Calatrava, a bit more to East and down Rambla Prim, then to go around Plaza de les Glóries and then via Avenida Diagonal heading SE to the Fórum (km ~30) and then on Avenida Litoral around the Torres Mapfre and Parc de la Ciutadella (km ~35), Arc de Triomf then again we go on to Plaza Catalunya, then heading South to Colon and then through Parallel heading North (km ~40) to finish line at Plaza de Espanya after 42.195m! 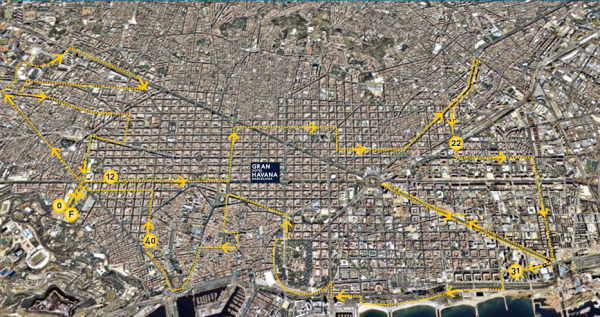 To sum up my experience with this beast:
– 42.195m are doable in 4 hours if your body doesn’t break and you train consistently 3/4 times a week for about 4 months;
– Barcelona Marathon was a very good event, well organized, lots of people on the street, more than 15k runners, perfect weather and nice sightseeing;
– If you have experience with running but still wondering about the Marathon go for it; just take aim for a 20% slower pace that what you are used to for the half-marathon and be careful with loading your energy level for the 3/4 days prior to the race.

[Update: after seeing the doctor I already have the MRI results and nothing too serious is going on (at least for now…), so see you on the tracks, preparing for another race].